Interpreting Art and Chemistry in the Google Era 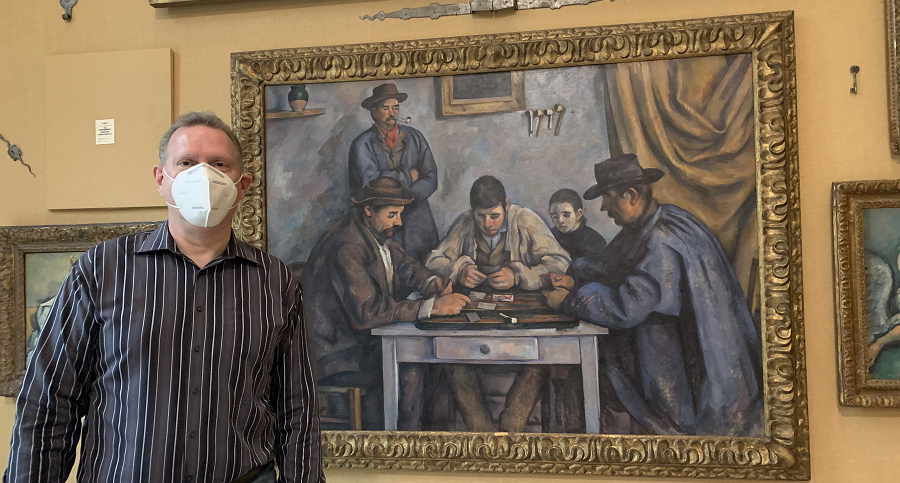 As a resident of Philadelphia, I love the Barnes Foundation. It is one of the world’s most celebrated private collections of Impressionist and Post-Impressionist art with more Cézanne’s than the Louvre and more Renoir’s than anywhere.  As it is a mere 15 minute walk from our house to the Barnes, my fiancée and I are frequent visitors.  Or at least we were until the pandemic.  They reopened to visitors recently with new restrictions (masks, limited numbers of people per room, social distancing), but it still took us a while to feel comfortable going back.  We finally did, and my photo with Cézanne’s “Les Joueurs de Cartes” (“The Card Players”) brought back memories of something I had written on art and chemistry.

As a co-editor of the American Chemical Society’s renowned ACS Guide to Scholarly Communication, I was responsible for the Chemistry in the Google Era part of the work and personally authored the chapter Chemical Structures in the Google Era.  In that chapter, I made an analogy between how chemists and artists both used centuries-old traditions for depicting 3D subjects in a 2D medium.  This includes the technique of interposition, where chemists, like painters before them, show one object occluding another to imply three-dimensionality in a two-dimensional medium (a painting for an artist; a whiteboard, journal article, or PowerPoint for a chemist).

Cézanne used interposition in his famous Card Players painting by showing the observers who appear to be in the back partially obscured by the table and card players who appear to be in front, suggesting depth.  Chemists do the same thing with structures like the bicyclic compound norbornane, where a slight break in one bond suggests that it is behind the bond that is occluding it.  While the analogy may seem a trivial one, it takes on much greater significance in the Google era, where traditional 2D representations of 3D chemical structures can be severely misinterpreted by machines.  Humans can look at a 2D image and understand the 3D information encoded in the 2D cues. Chemists do the same thing with chemical structures. Computer software, on the other hand, can misinterpret the 3D intent of a 2D chemical structure depiction. For merging large databases of chemical structures as well as for machine learning, pristine chemical structures that can be interpreted correctly are key, and stereochemical misinterpretation is the kiss of death. I refer you to my chapter in the ACS Guide to Scholarly Communication for a more in depth discussion of the topic.

Albert C. Barnes created his foundation primarily to teach students about art and displayed his collection in tight, symmetrical groupings that he called “ensembles” to provide those teaching moments about the visual relationships between the pieces on display.  While Barnes did not document the rationale behind his ensembles before he was killed in a traffic accident in 1951, I had an epiphany in one of his galleries that was as clear as day.  Tucked away in a small corner room on the second floor of the Barnes is an ensemble with a glass case full of metal and carved wooden African masks in the center flanked on each side by two Picasso portraits with two Modigliani portraits flanking each of those.  All of the pieces of art shared the same motifs:  elongated faces with striking almond-shaped eyes.  It was clear to me that Barnes was trying to show that art transcends time and space and culture.

From the similarities of how artists and chemists depict their three-dimensional worlds in two dimensions, I would argue that art transcends discipline, too.

Make It Happen
Our proven and trusted services can help your organization bring your STM informatics ideas, projects, and products to reality faster and better.
Start Now
© Copyright 2020 STMatics LLC, All Rights Reserved